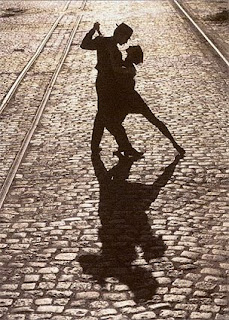 The eagerly awaited decant vial arrived late on a Saturday afternoon. I opened it and applied just a tiny drop to each of my wrist. First whiff: naughty thoughts began to play in my head, of digging out my little black book, calling up the virtuoso lover of my lifetime and suggesting he comes over immediately for a tryst. I remember thinking I should try to locate some opium before he arrived. While waiting for the drydown, I went round the block to buy a bottle of sparkling water. When I entered, the shopkeeper got down to his knees and begged me to marry him. As I exited, a very attractive young woman held open the door for me, half smiling, gazing curiously into my eyes. Strong stuff, I thought. Apply judiciously.

I decided my evening plans would include test-driving this fragrance in public while dancing the tango at a milonga. How better than with a dozen dance partners during a sweaty summer full moon in the tropics? I took a long cool bath, put up my hair, did my makeup, donned my dress and applied Tabac Blond in earnest this time.
Instantly, a movie began in my head. The perfume's first notes were vaguely automotive - a quick petrol stop at twilight, in a roadster with leather upholstery and a wood dashboard. I glimpsed my own face in the rearview mirror and saw I bore a striking resemblance to Faye Dunaway in "Chinatown". I wore a thin, champagne-colored silk charmeuse blouse sans bra, wide-legged trousers and trailed fox furs. I called at the penthouse suite of an aging yet dangerously handsome actor. His Asian butler ushered me past the tall vases of white flowers in the foyer into the wood paneled library where the actor sat waiting for me in a leather chair by the fireplace, smoking a cigarette. Perhaps he was some kind of an Eastern religion cultist; I detected the smell of incense in the room. The actor rose and tried to kiss me on the mouth. I wrenched myself away, secretly flattered and not a little curious about what it would be like to kiss him. I had him sign the papers I carried in my Hermes satchel with the fountain pen on his desk. He offered cocktails. I declined.
In real life, I had by then driven across the city and was arriving at the milonga. Tabac Blond continued to develop and unfold like a story. I spotted my regular tango partner sitting at a table with two other gentlemen; they rose as I approached. The white flowers were at that moment coming on: tuberose, carnation. The men told me I smelled ravishing. The dancing began and I was swept into the close embrace of a succession of partners. The room was warm. I perspired. The perfume only gained potency from my body's heat.
And then, in the second or third hour, the dark flowers came on. At this stage the iris nearly closed up my regular tango partner's throat and nose, and his eyes burned. The movie in my head changed; now the handsome actor was some kind of a fetishist and I was belle de jour, lying in a coffin, naked except for a chiffon shroud, eyes closed, pretending to be dead while he practised some secret depravity. The scent had gone all purple: regal, funeral, decadent. But not sad.

In deference to my favorite partner's allergy to perfume, I went to the ladies' room and bathed the nape of my neck and my throat in cold water. The perfume persisted, mutating. And as it dried again, the movie changed. Vanilla, clove, church incense, books - the library again. Hard liquor. I smelled the interior of the roadster. I craved a cigarette. Only then did I begin to smell the powder, and it was face powder and resin incense burned on charcoal that finished the fragrance story to my nose.

I did not shower before falling exhausted into bed. The perfume gave me dreams. When I woke up, the sun was blazing. I sniffed at my wrists. What was then left of Tabac Blond on my skin was what I'd smelled when opening the fitted drawers of the 13,000 Euro antique Louis Vuitton trunk I could not possibly have bought, but coveted last year in Paris.

As to Tabac Blond being thought dyke-y by some: I think it's possible it might have emboldened some already curious Vassar heiress to make out with a glamorous, worldly older woman in the ladies' room of a Monte Carlo casino or a glittering nightspot decades ago. Particularly if the woman wearing it it had been Marlene Dietrich. If it's a fragrance deemed equally suitable for men, I have not yet met the man who could carry it off during its floral passages. It seemed estrogen-loaded to me then. The evening after the milonga my regular tango partner confided in me that no man there could keep his eyes off my derriere. I know it wasn't the dress I wore, but the perfume. Perhaps Tabac Blond is suitable for both genders because the story it tells is of a meeting. Whether that's the masculine/feminine duality of one individual's nature or a rendezvous between a man and a woman, I cannot say. But to me, this fragrance is never androgynous.

This one, I think, is a monster worthy of its notoriety. It tells a story that keeps unfolding for the better part of a day, like an acid trip. Timing must be everything in deciding when to apply it, since it will play out in its own good time. On me, it's frequently a tigress. I will admit to feeling at some times during its unfoldind that it wears me, not that I wear it - but in much the same way I'd feel if draped in exquisite sable furs from head to toe. Even if I am just its mannequin sometimes I won't complain. I think Tabac Blond must be what Daphne Du Maurier imagined Rebecca smelling of as she ordered those transparent undergarments of hers from the nuns. Memorable, seductive, strong. C'est plus fort que moi.
Posted by Diamondflame at 4:23 PM